Inside: 12 amazing benefits of babywearing for you and your baby.

When you first have a baby, most likely all you want to do is hold them and snuggle them in your arms.

Those first few days or weeks where all you do is hold them and stare at them is amazing! But once real life kicks in…you quickly find that it can be a major struggle to get stuff done while holding a baby.

And then you also find out that many babies don’t like being put down…ever! Because if you do they’ll scream bloody murder. These are affectionately known as Velcro babies.

So what do you do when you can’t put your baby down? 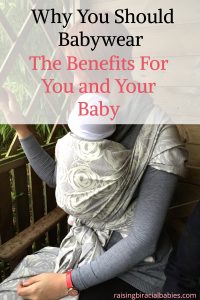 Let me introduce you to babywearing…

When I had my first baby, I knew what babywearing was but didn’t give it much thought. That is until I ended up with a Velcro baby and I had to figure out a solution fast! She wouldn’t even sleep if she wasn’t in my arms.

Someone suggested going to a babywearing meeting, (a meeting where you try on different types of wraps and carriers to see what you like best) and I haven’t looked back since!

Not only are your hands free while you can still hold your baby close, but there are so many other benefits to babywearing as well!

Babies are used to sitting snuggly in your womb. It’s where they lived for about 9 months. So they instinctively want to be near you in what is known as the fourth trimester.

The fourth trimester starts from the day they’re born until they’re 3 months old.

It’s a huge adjustment for a baby to go from being in your womb to being in the huge open space of the outside world, so when you wear your baby they get that security of being near you all the time. 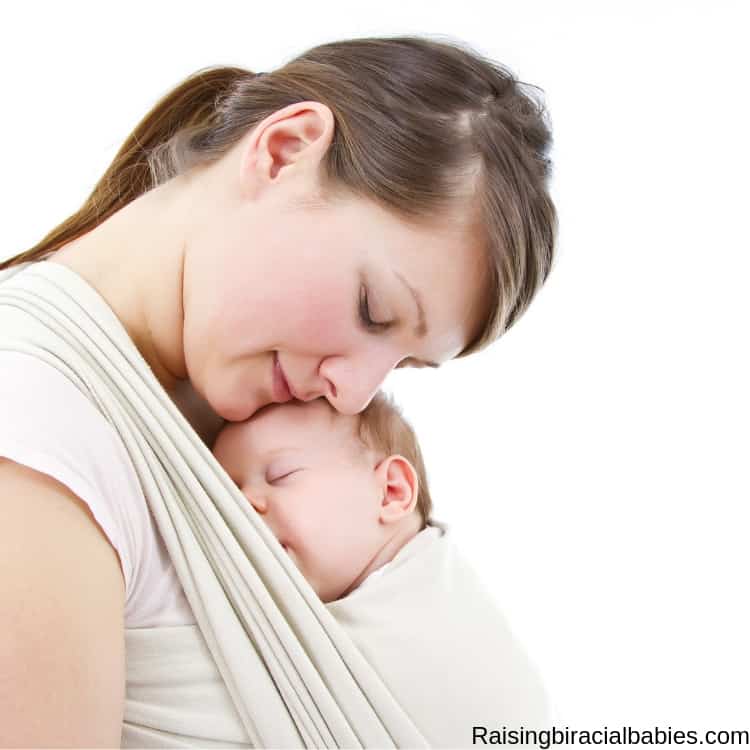 When you’re babywearing you’re also strengthening the bond with your baby! You’re taking care of their needs because you’re right there as soon as they need you.

You can talk to them, sing to them, snuggle them, feed them, all which promotes bonding! – (source)

Babies feel safe because they’re with their caregiver who meets their needs very quickly. They don’t have to cry for a long time to get someone to hear them and come to them because you’re right there.

Knowing you respond to them quickly begins to build trust between the two of you, which is essential for your relationship. – (source)

They learn how to socialize

Babywearing allows babies to look around at the world while they’re still close to you.

Because they’re right up in your face, they can watch how you interact with people. They can hear how language sounds when you’re having a conversation with someone.

It’s a great way to learn socialization while staying safely tucked against you.

They control their stimulation

Once your baby inevitably becomes over-stimulated from all of the things they see and hear in the world, they can nestle right into you to block out that stimuli.

This ultimately makes for a less cranky baby because they have control over which experiences they want to engage in, and which ones they’d rather pass on.

It promotes exercise for you

You’re constantly engaging your core muscles when you’re babywearing so this is a great way to improve your core strength! It’s also like weightlifting because you have to bend, squat, and move around with extra weight attached to you!

If you’re doing this for several hours or more each day, (I know I was!) it’s a workout without you even knowing it!

Baby carriers are much easier to use in public

Carriers take up much less space in your car than a stroller.

When you go out in public you don’t have to worry if your stroller is too bulky to get in between the tiny clothing aisles at the store, or if it can make it over bumpy terrain outside, or how you’ll carry around your car seat with your infant.

You just pop the baby in and go!

Baby is calmer and happier

Your baby will be more calm because again, you’re there to meet their needs very quickly. When babies cry for lengthy periods of time, their cortisol rises. This is the hormone that increases when they’re stressed out.

When you’re babywearing they don’t have that rise in cortisol because they aren’t crying for long periods of time.

This was one of the biggest benefits for me.

Instead of trying to battle with my oldest to get her to sleep in a crib, I just let her sleep on me in the carrier.

Some people say it causes bad habits and they’ll never learn to sleep alone, but I can assure you that’s not true. I wore both my babies and they both have no problem sleeping in their own beds now.

When you wear your baby, they can sleep whenever they want and if you don’t want to try sleep training, you won’t have to listen to them cry when you try to leave them in a crib. 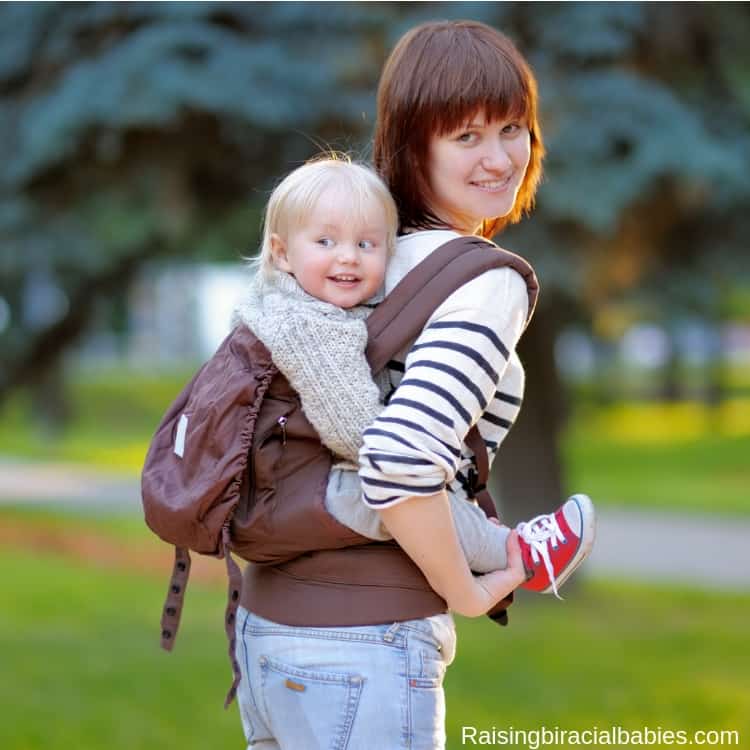 Toddlers love it too

Even though toddlers crave independence, they also still want to be near you.

But they’re too big to be carried in your arms for a long time, or you have other stuff to do.

This was true for my oldest as she was 22 months old when I had my son. While she enjoyed going off around the house and doing her own thing, she still very much wanted to be held.

Occasionally I would wear her if I wasn’t wearing my youngest, or at times I would tandem wear them! (Tandem wearing is when you wear multiple kids at the same time). It would help her to feel close to me and continue to keep my hands free to cook or get chores done.

Related: How to Manage Two Kids Under Two

A lot of times when my daughter was a young toddler, her tantrums would subside if I would hold her. By wearing her, it decreased the length of tantrums or they subsided completely.

If your toddler has a meltdown, wearing them helps them regulate their emotions and promotes bonding again. They feel safe because they’re close to you while they’re getting these huge emotions out.

If you have young children, chances are the older one will be jealous of the littlest one.

One of the things that was hard on my oldest was I would babywear her all the time before I had her brother. So once I started wearing her brother she would want me to wear her too because that’s what she was used to.

By wearing her alone or tandem babywearing, it decreased her jealousy because I was still able to do something I had done with her all the time before the new baby came.

Related: 8 Ways To Keep A Toddler Busy While You’re Breastfeeding A Newborn 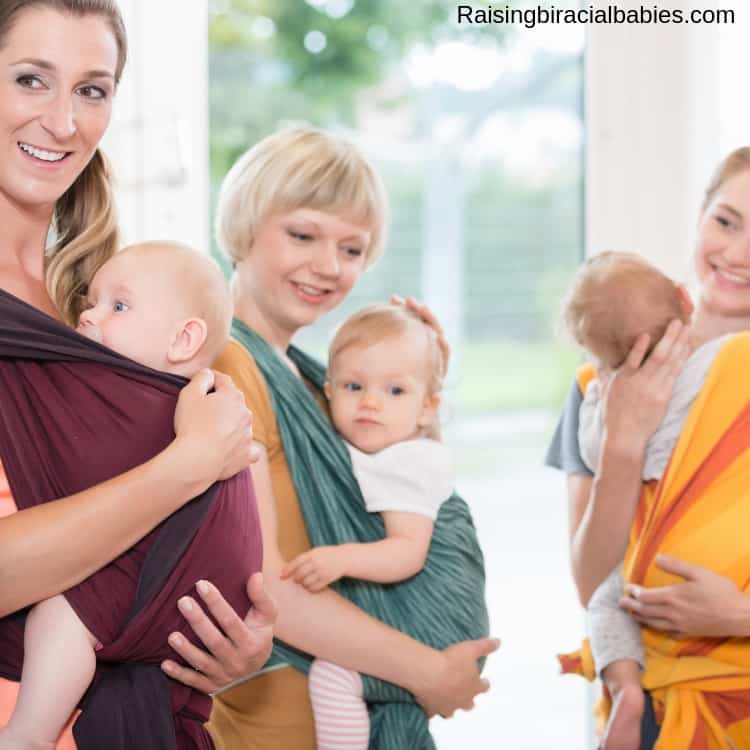 Because wearing your child is often a part of your daily routine, you could very well be wearing them for hours a day or use the same carrier for years! So it’s important to make sure you have the carrier or wrap that’s most comfortable for you.

Not all carriers for babies and toddlers are the same, so you may have to try a few before you find the one, (or ones) you love.

I ended up with several that I would use for different occasions.

My absolute favorites are:

I prefer the stretchy wraps when my babies were little and once they were between 4-6 months old I switched to the Ergo, Tula, and Kinderpack.

These are my go to carriers because they are super long lasting! I’ve had mine since my oldest was born and it has gone through two kids and they are still in great shape!

I also love the comfort factor. When you’re wearing your baby for a long time, you need something comfortable! These carriers support your back and shoulders so you don’t become uncomfortable using them. 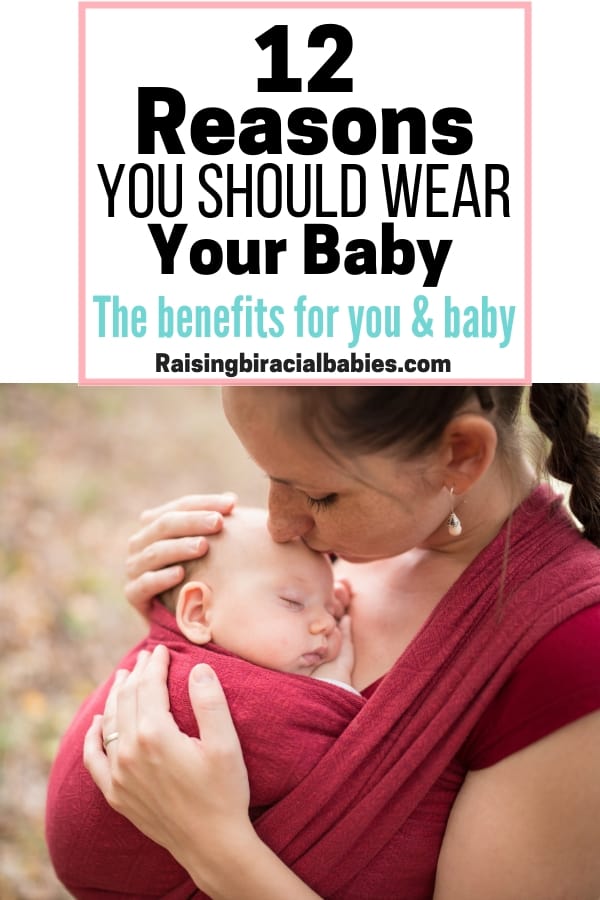 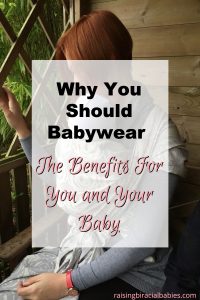 There are amazing benefits of babywearing for you and your child!

Babywearing makes life a lot easier, especially if you have more than one kid. Plus it helps your baby stay calm, happy, and learn to socialize. It helps your toddler decrease tantrums and jealousy while strengthening your bond.

Despite what others may say, your child won’t be dependent on you forever if you hold them often when they’re little.

In fact, if you let them be dependent on you when they need it, it actually creates independence because they feel safe that you’ll be there for them when they need you.

Babywearing isn’t for everyone, but if you’re interested in it, don’t let the opinions of others scare you from trying it out.

The One Potty Training Tip You Need to Ensure Success 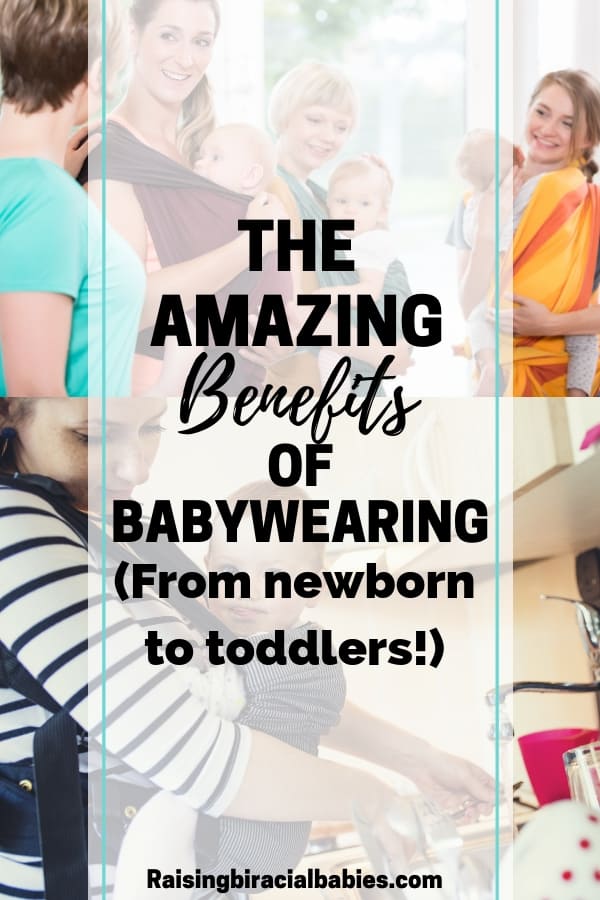 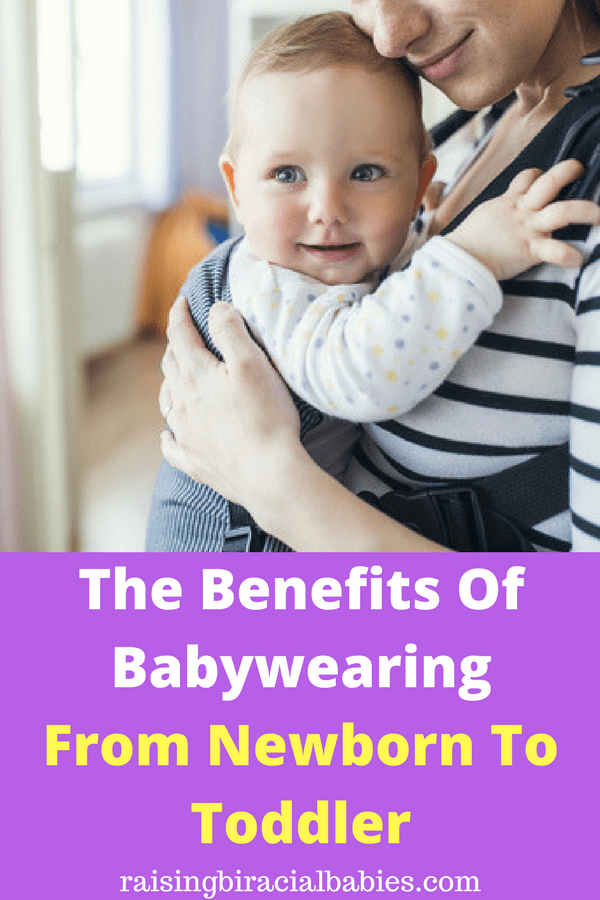 I love wearing my babies. We go for hikes often with our 6 month old and toddler. Me and my husband each wear one and it makes it a great family activity. I love my Ergo most though!

Yes I love that it’s so easy to take your carriers somewhere (so preferable over a stroller for me!) I like to bring my carrier with too when we go for walks because I know inevitably my littlest will get tired and I can just pop him right in and keep going!

Thanks for sharing! I didn’t know about tandem wearing!