Having a daughter made me realize how much more I wanted for her than what I had. I’m talking about in life when you are forced to fit into the “female” role in society. I didn’t grow up thinking I could be whatever I wanted to be. When I was younger, I didn’t necessarily feel like I could change the world.

Throughout the jobs I’ve had I’ve always had to play the passive role to the men I worked with or for. Strong women were not held in high regard. If you didn’t smile enough, (because you were serious about your job or because hey, maybe you didn’t want to freakin’ smile) you were considered cold and unfriendly (to put it nicely). Your suggestions weren’t taken as seriously as the men’s opinions. Or if you were doing well at your job, you were doing a “great job for a woman”.

It was a game I had to learn to play to avoid confrontation or be successful, and I want my daughter to absolutely shatter that game.

I never want her to lose that she emphatically sticks up for herself and for the underdog. I love that about her and I want her to keep that within her forever. It’s not going to be easy but change is happening, and I want her to be a force of nature for that change.

Not only does she have to fight harder to gain respect because she is a girl, she also has her race to contend with. She’s beautifully black and white but much of the world will probably see her as black. Unfortunately in most of this world that makes you lesser of a person. But I’ll be damned if I don’t make sure she will know that she’s got that black girl magic within her. I will raise her to be so proud of every part of herself so that she has a strong foundation of self-love and with that, she will fight back with the ferocity I know she has.

This journey to the strong foundation of self-esteem I want to instill in her, starts with books. Books open doors for children to see what’s possible. It also opens doors for discussions to take place. These diverse books will show your daughter (and mine) that strong girls can look like anyone and they can do anything. These books show our daughters that women have changed the world. And our girls will continue to, one day, change the world!

If your kids love listening to books, (in the car, at night, during quiet time, etc.) you can get a free 30 day trial of audible from Amazon! They have a huge selection of children’s books!

Ada is always curious. She wants to know the why’s and how’s of everything. One day in her house there is a horrible smell and Ada wants to do science experiments to figure out where this smell is coming from. Sometimes her experiments don’t work and lead to more questions as she continues her quest to discover the smell. This story shows little girls you can be a scientist and to never to give up. If you can’t figure out the answer keep asking questions and doing those experiments to find out the answers!

This is one of my daughter’s favorite books! There are 40 black women featured who broke boundaries and changed history! It talks about activists, poets, writers, singers, chemists, pilots, mathematicians, and more! Little girls will be inspired by the stories of these women who, despite being discriminated against, did amazing, life changing things!

She Persisted: 13 American Women Who Changed The World

This book shows little girls you don’t have to take no for an answer. You can keep fighting for what you believe in or what you want to do in life. It features 13 women, (Harriet Tubman, Oprah Winfrey, Helen Keller, and Margaret Chase Smith just to name a few). This story shows little girls there is no ceiling. They can reach for the stars!

I Am Rosa Parks (Ordinary People Change The World)

This story shows little girls why Rosa Parks is considered a role model and what she did to help launch the Civil Rights Movement. She was an ordinary woman, but she changed laws and lives.

The story of Audrey Faye Hendricks is of a 9 year old girl who wanted to make a difference in the Civil Rights Movement. She is the youngest known child to be arrested for the civil rights protest in Birmingham Alabama. It shows little girls you are never too little to make a difference.

This book is the perfect introduction for the littlest strong girl. It’s a cute board book that talks about several influential women in history, (like Rosa Parks, Coco Chanel, and Wilma Rudolph just to name a few!)

I Dissent shows a powerful lesson that you can disagree with something and take a stand against something you don’t believe is right. This book shows how Ruth Bader Ginsburg, (Supreme Court justice) stood up for people’s rights and fought against injustice with her dissents (or disagreements).

Hidden Figures: The True Story Of Four Black Women And The Space Race

This book discusses four African American women who were really good at math, and used their talents to participate in some of NASA’s greatest successes. These women had to overcome the challenges of being a woman and being African American during that time. They also had to fight for their place in a career that many black women were not a part of. But they persevered and it shows little girls they can love math and persevere too.

Shaking Things Up: 14 Women Who Changed The World

This book talks about 14 young women who changed the world. Some of the women in the story are Frida Kahlo, Ruby Bridges, Molly Williams, and Mary Anning just to name a few. It’s all about young trail blazers and activists to inspire your little girl. 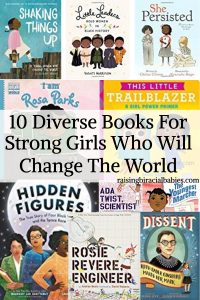 Here’s the thing, these aren’t just books. They are showing your daughter that girls and women of all colors can, and have changed the world. They are conversation starters. They show your daughter that women are a force to be reckoned with and gives fuel to their fire that she won’t be held back in society. Books show a little girl she can be whatever she wants to be.

Do you have a favorite book for the strong girl in your life? I’d love to hear, I’m always looking for more books to read to my daughter!

10 Crafts and Toys That Support Racial and Cultural Diversity

What To Expect When You Have Biracial Children

How To Support Mixed Race Identity As A Single Parent

Why Books With Multiracial Families Matter

How To Not Raise A Mean Girl 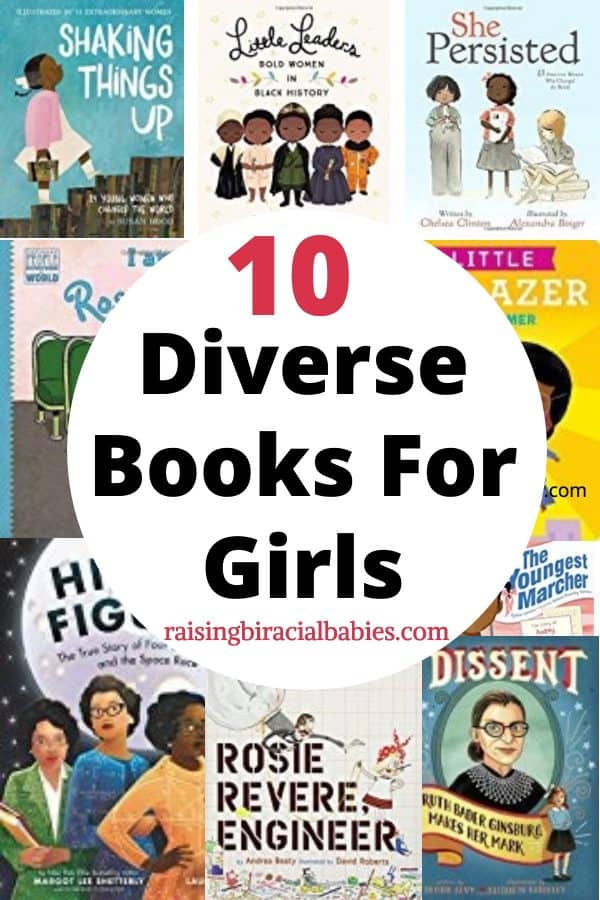 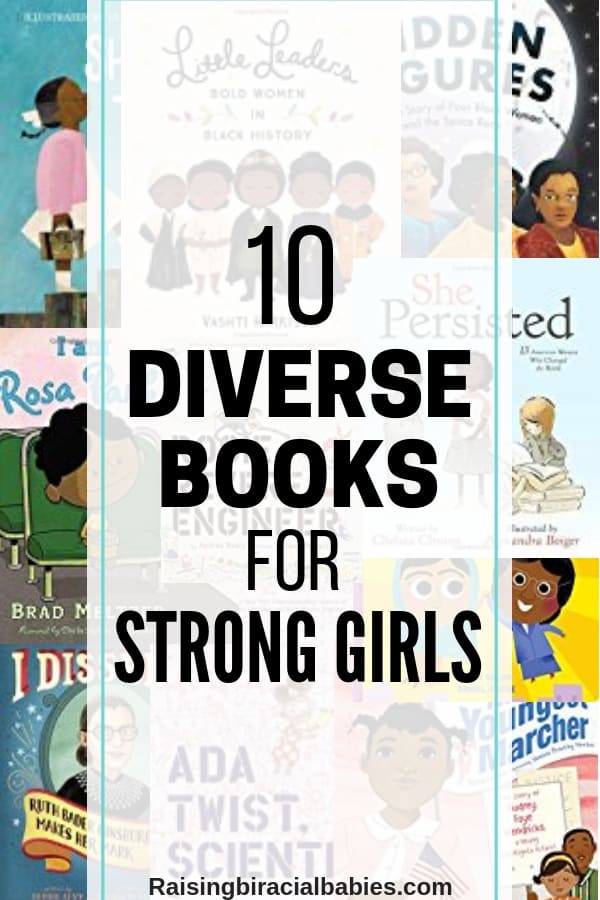 Previous Post: « 8 Reasons Why Being A Single Mom Is Awesome
Next Post: How To Get Your Toddler To Listen Without Yelling »
Subscribe
4 Comments
Oldest
Newest Most Voted
Inline Feedbacks
View all comments

This is an absolutely wonderful post, and a beautiful resource for parents and educators alike! My son and I just read Rosie Revere Engineer recently, and I plan to add the rest of these to our reading list! Thank you for sharing!

Thank you so much! We really love these books so I’m glad you found them interesting! And yes, even though my son is younger, he hears these stories all the time too!

I had no idea so many awesome books existed! I am raising three girls and am always looking for books that encourage them to be strong and confident in who they are. THANKS!

You’re welcome! I’m so glad you liked the list! Yes they were definitely books I had to search for. But well worth the search because we love these books! I hope your girls enjoy them too! 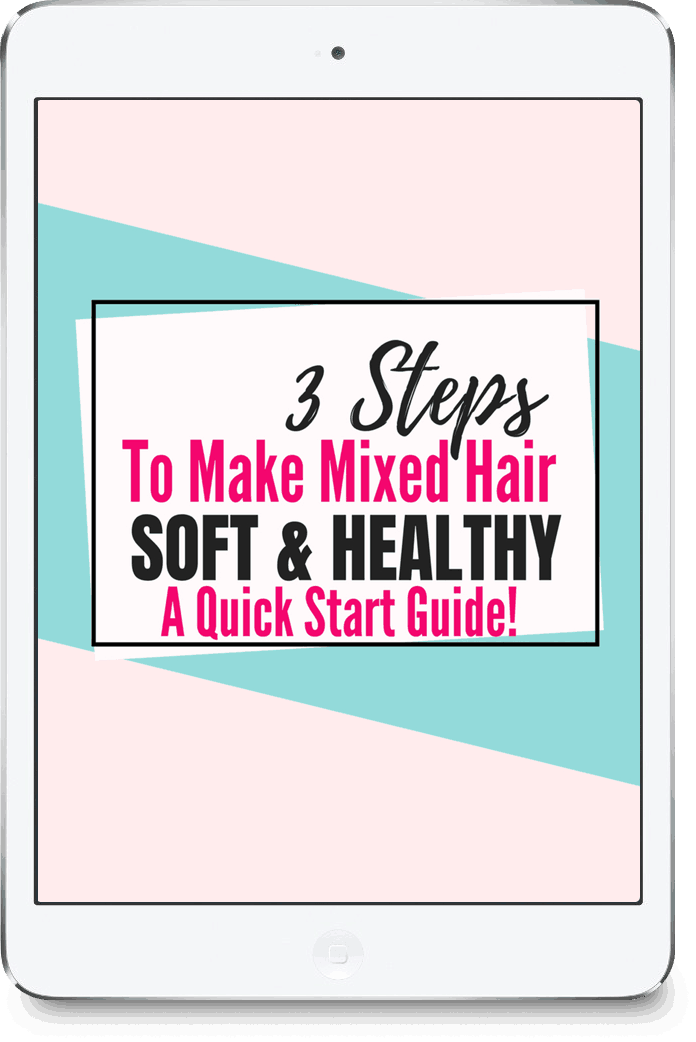 This site uses cookies for your convenience: Read more here.