As a single parent raising biracial or multiracial children, you’re faced with a unique challenge. How do you support mixed race identity when you’re not mixed? Because in many cases the kids will primarily stay with one parent.

It’s so important for mixed race children to feel a sense of pride in all aspects of who they are and this can only be accomplished if you’re teaching them and exposing them to their other culture.

But that can be really tough if you have a contentious relationship with your ex. You may not want to be reminded of them or celebrate anything related to their culture.

For the sake of your children though, you have to take your ex out of it. You want your children to grow up with a solid sense of their entire identity.

They’ll appreciate the effort you made in celebrating all of who they are because you want the best for them.

Being supportive can also be challenging if you don’t know how to incorporate your children’s other heritage into your home because it’s not how you were raised.

I’m a white mom raising my daughter and son who are half black. They do see their father and his family but not nearly as consistently as they see me and my family.

This presents the challenge of figuring out how to support their black culture.

I want my children to be proud of their black heritage and it is up to me to make sure our home is filled with emotional support and physical things that’ll promote a positive identity. 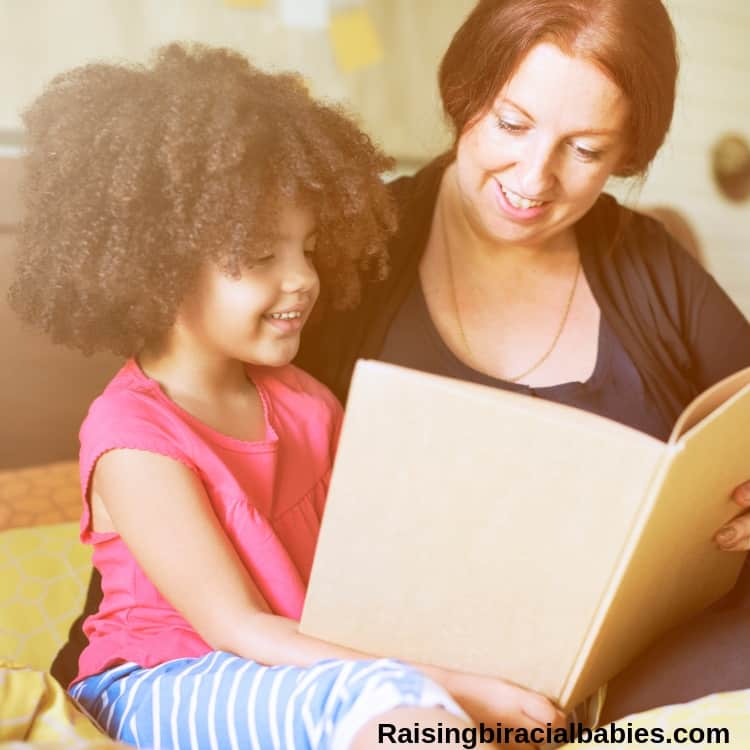 Before I became a mom to biracial children, I never thought much about how characters you could identify with in books or with toys, would be important to your self worth.

Clearly that’s because I’m white and have never had to think about that. But I don’t want my children to look at a doll or book and wonder why there’s none that look like them.

There’s obviously no shortage of books or toys that have white characters so I need to make sure they also have books with biracial children or black children as the main character and diverse toys so they can have their reality reflected back to them.

Your kids need diverse books and toys in their every day lives because while they mirror their reality, they also represent dreams and possibilities.

They can dream they’ll be like their favorite character because they can relate to that person. Or maybe they read a book about a black child who grows up to become a scientist and that gets them thinking that they can do that too.

Representation is so important because your kids begin to create their sense of self early on in life.

I don’t ever want my kids to think they can’t accomplish something because they didn’t see examples of people who look like them succeeding.

Have physical reminders around the house

My children are half African American and Ghanaian so I have African artwork displayed throughout the house. I also have pictures of their dad’s family and we’ll look through them and talk about who they are.

I know that it’s not possible for everyone to have pictures of their ex’s family but if you have any, it’s a great way for your kids to connect to their other family. If you don’t want them around the house, you can make an album for your child and they can keep it in their room.

Displaying artwork, sculptures, or even having baskets, rugs, or pillows out that represent your child’s other culture is a great way to incorporate physical reminders around the house.

Having that connection to their other roots can help them feel pride and give them knowledge about who they are, which is so important for their positive mixed race identity.

When I was growing up there was no shortage of white Disney princesses so I could always identify with the characters from my favorite movies.

Once I became a mom I sought out movies and tv shows that had characters of other races.

Of course my daughter inherited my love for Disney movies so I’m super excited that they’ve been expanding their diversity!

Some of her favorite multicultural princesses are Moana, Nella The Princess Knight, and Tiana. I love that she can watch her favorite movies and the lead princess isn’t always White.

Some other tv shows that feature main characters who aren’t white are Elena of Avalor, Miles from Tomorrowland, Handy Manny, Dora The Explorer, and Doc McStuffins. 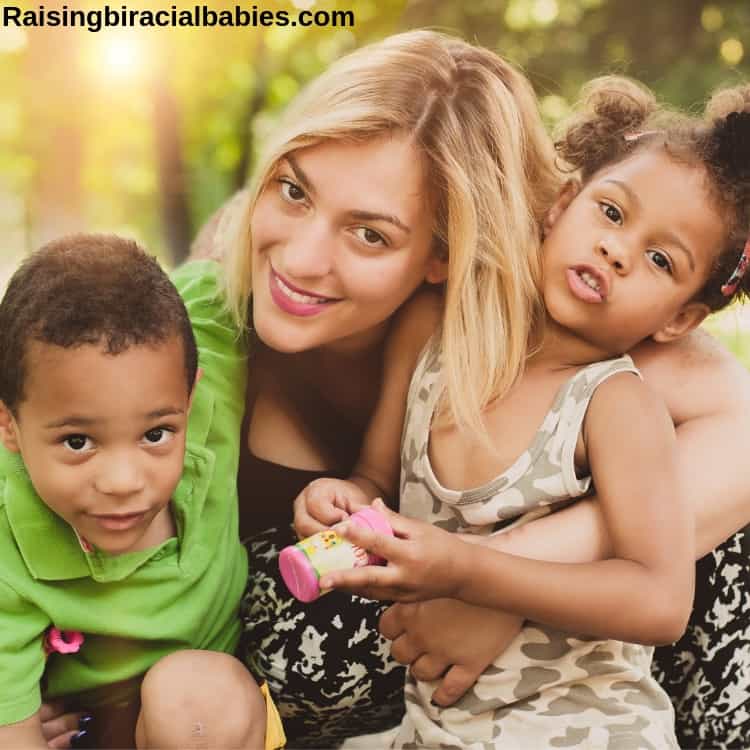 Be aware of what you and others say

Make sure you watch what you, your friends, and family say about other races, especially your children’s other race.

For example, you don’t want them to hear you talking negatively about your ex, (how they act, talk, or physical attributes) because your kids can internalize it and think negatively about that side of themselves.

You want to be careful to avoid certain words that’ll make them think that a quality they have is bad.

My kids have beautiful curly hair that takes a long time to wash and comb out. I used to get upset when my daughter would roll around on the floor because I didn’t want her hair to get tangled and frizzy, which essentially would undo all the hard work I just did.

But then I noticed when her hair wasn’t freshly combed out, she would get upset and start saying her hair was frizzy so I realized she was getting that frizzy was a negative word from me.

I’ve since made the effort to really watch what I say when I’m trying to redirect her from rolling around on her hair.

Another example is avoiding saying your child’s hair is nappy, too hard to manage, or you wished they had “good hair”. All of those phrases have a negative connotation and it’ll start to chip away at your child’s self worth.

I’ve had people close to me make comments about my daughter’s hair not being as nice as my son’s hair because his curls are looser, (which was a backhanded way of saying it was more like white hair) and I shut that down immediately. There’s no room for any type of talk that’s going to make my kids feel bad in any way.

You’ll want to be cautious of what’s said about physical attributes of your child’s other culture, (like skin color, noses, lips, eyes, etc.) because your kids could end up hearing it and internalizing it.

If you have family or friends who use ethnic slurs you’ll want to make sure you let them know that’s not tolerated in your house or around your kids. 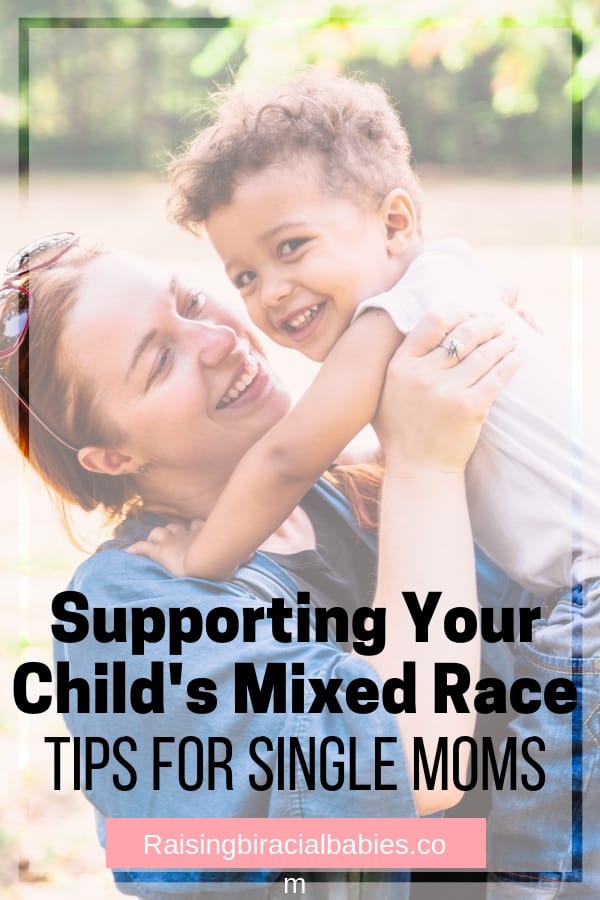 Supporting your child’s mixed race identity is so important!

Imagine if you grew up in a house and you had no toys or literature that featured someone of your race?

You might grow up feeling like because you look different that you can’t do the same things the characters in the books, tv shows, or movies can do.

Or imagine if you grew up hearing your parents say words that had negative connotations about the characteristics that you had?

It would definitely affect your self esteem!

If you’re reading this, I know you care just as much as I do and want to support your children’s mixed race identity the best way you can. Sometimes it’s hard to know how to do that because of your relationship with your ex or you simply don’t know how because you weren’t raised in that culture.

Including books, toys, and movies that have characters of your children’s race, having physical reminders around the house, and avoiding negative words regarding their other heritage, will help make your children feel supported.

Your home should be a place that celebrates your children’s mixed race background.

As they get older, you’ll watch their confidence in their identity grow, and you can feel proud that you fully supported them.

What other ways do you help support and celebrate your children’s other races? I’m always looking for new ideas so leave a comment below!!

What to Expect When You Have Biracial Children

Why Sunscreen is Important to Use On Your Biracial Children

How to Help Heal Eczema on Biracial Skin (in 6 Steps) 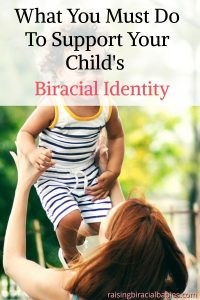 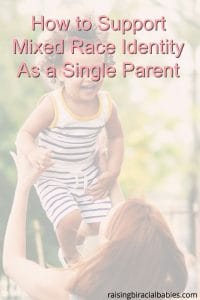 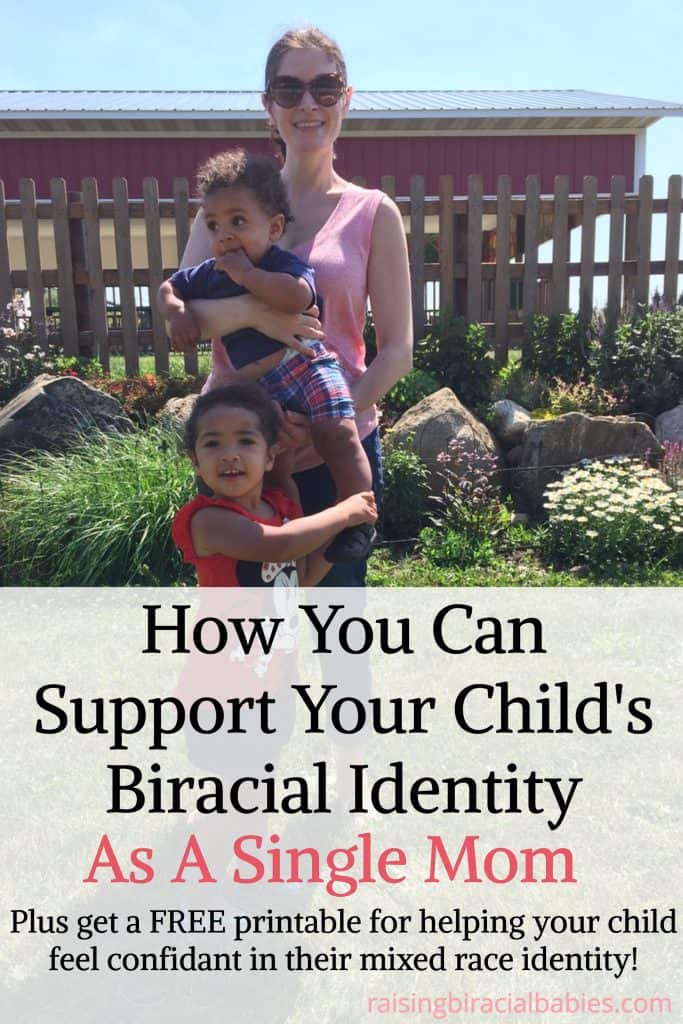 Love this article and have shared it on Pinterest. 🙂 Im mixed race and my mum was a single parent for the majority of my childhood. (She is white English and my dad was black Cameroonian). We moved to England when I was 4 and my dad stayed in Fiji, and I was only in touch with him sporadically after that. He died 2 years ago. I never knew much about his family but in recent years he put me in touch with a cousin who lives in America. He’s told me more about my Cameroonian family which has been… Read more »

Want to learn to braid and learn biracial hair care? I can help!